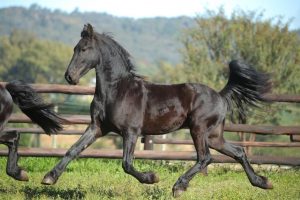 Foal Premie: Darius was not judged as he was orphaned a month before the judging.

Darius was the first foal to Tjalf 443 ‘Sport’ for Hiske but unfortunately also her last. The loss of Hiske has left a gaping hole at Doorndraai Friesian Stud and we really look forward to seeing how this colt develops.