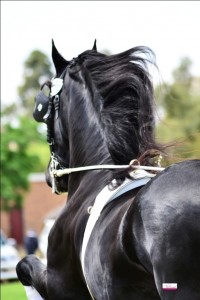 The prestigious Top 50 Breeders of the Year list compiled annually by the KFPS in the Netherlands has become a big challenge for Doorndraai Friesian Stud and after finishing a strong third in 2012 the goal for 2013 was clearly set out by owner Marlise Botes and that was to finish in a consistent place and if possible improve on the already great third place of 2012.

With the Top 50 list being compiled according to first and second premies achieved by breeders during KFPS Inspections all over the world, the two judgings that took place in South Africa during February and October 2013 were obviously priority events for the Doorndraai Team.  Good results in both inspections including Pandora van Doorndraai (Friso fan S. x Ruurd) that became Kroon as well as At van Doorndraai (Ritse 322 x Wierd 409) that received a very good first premie as a gelding, helped Doorndraai to move up one place from third to second in the 2013 final results.

For a second year in a row Doorndraai was the best International Breeding Stud outside the Netherlands.  With a third of the breeders on the Top 50 Breeders list being from outside the Netherlands, it is a wonderful achievement to lead a field including strong countries such as The United States, Denmark and Australia.

Studbook Stallion Tjalf 443 ‘Sport’ being provisionally approved on offspring.  The Tjalf 443 ‘Sport’ offspring in South Africa has been excelling at local shows and included results such as the 2013 FPSSA National Junior Champion Filly and Colt as well as FPSSA National Junior Supreme Champion.  Tjalf himself has been the Supreme Champion Single Harness at the Horse of the Year and FPSSA National show two years running with the 2014 Show season about to kick off in a month at the KEP Horse of The Year.

Doorndraai has surpassed their biggest goals for the past few seasons for a number of reasons.  Nynke Bosma joined long-time friends of Doorndraai, Jolanda Schreuder and Sybren Minkema on a visit to SA in 2012 and have become an integral part of the stud over the past two years putting the Doorndraai horses through their paces and putting a number of youngsters under saddle.  This year 23 year old Nynke, joins the stud for a third season and she is being assisted by Alida Copeland De Jager who took over the riding duties for the past four years.  Alida has taken Friso fan S. to new heights when he became Gauteng North Adult Elementary Medium Dressage Champion in November of 2013.  Alida has also shown her skill with young horses and took gelding At van Doorndraai to the Champion Gelding Under Saddle at the 2013 FPSSA National Show.

Being able to do our own AI and semen collection has also put us in the position to build up an extensive data base that is contributing to a very high success rate in pregnancies with an average of twenty foals arriving each season.  This season we aim to have over twenty mares in-foal and we should be reaching this goal in the next few weeks.

Congratulations has to go out to the only other South African stud to make the top 50 list, Millford Friesian Stud based in KZN, that finished a good 40th place.  We would also like to congratulate all the other studs that made the list dedicating themselves to a breed loved and admired all over the world.

Doorndraai stays focused on improving the Friesian breed not only for serious breeders but also for the exploding market of recreational riders seeking the perfect companion.  Let’s hope 2014 brings new highs and we look forward to seeing you all at the shows and inspections during the year ahead.